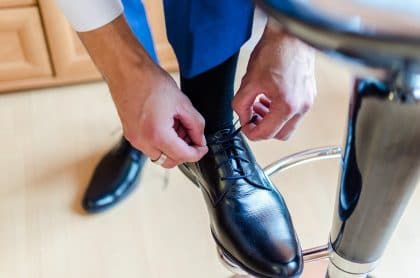 Having recently gone back to the corporate world with the associated shiny black shoes and ironed shirts. I now paradoxically have the freedom to pursue the projects I want to pursue. When I left corporate, it was easy to list all the things that are frustrating – the commute (#SouthernFail), the politics, legacy issues (systems and processes), no formal influence on the people I was dependent on, change – the lack of it and too much of it, the morning alarm.

I left with a certain amount of bravado and arrogance. Start my own thing, work my own hours. But after a while, I began to see the value in a regular pay cheque. I also missed, what is to many colleagues, to me friends. I knew the cash buffer was getting thin, I needed to find a regular income. One of my contacts mentioned that it would probably take longer than I expected, he was right.

So what did I observe in the process…

There is probably one degree of separation between me and the person hiring in my previous industry (Insurance), perhaps two outside of my industry. I quickly realised the value of leaving my previous roles on good terms, not slacking in those last months, not burning bridges. With recency bias, people don’t remember how I did a job, they remember how I left.

It not only the people I worked closely with that the “informal” reference check may occur. It is often someone working at the new company, who used to work at the same one as me. “Did you know?” – “Yes, he was…“, I may have only had one or two interactions with this person, but it can be the difference between being hired or not.

When completing a reference list, I had no concerns about my former managers being contacted. I was happy that I had made the effort to stay in touch.

With the Network, timing is so important. I have a former manager who I continue to play employment tag with, we are a great fit, our skills complement each other, but so far has not worked out. I also had a former colleague who was hiring, we tried to make it a fit, but unfortunately it wasn’t.

I found it fascinating (on reflection), that in spite of being someone that many consider to be rational and largely unemotional, how much emotional turmoil went with the job application process.

Before I can interview, I have to convince myself 100% that this is the only role for me. People can sense otherwise.

I had a couple of roles where the hiring process was exclusive and extensive. Particularly one private equity company. I knew it was a bad fit. Long hours. Image would be important. My aversion to shaving every morning (month?) and buying expensive suits would not have fit well. The more hoops they had me jump through, the more I wanted it. The ego wanted it. I knew I needed to fight the ego.

The other side of this is dealing with rejection. Self doubt quickly creeps in. When I found the “perfect” role, they didn’t want me. It was so easy to think that nobody wanted me. Another internal battle. I was also getting interest for roles where I clearly wasn’t a fit. Sometimes it is just luck, sometimes it is reading between the lines. The predecessor could have a direct impact on whether they think I would be a good fit, in times like these, personality and soft skills are often more important than specific experience.

When missing out on the perfect role, it unfortunately often becomes a numbers game. Partly because of all the noise of 100s of applicants being filtered by someone who probably doesn’t understand my CV or maybe even the actual role requirements – perhaps because the hiring manager doesn’t really know what they want before they see it.

So I applied to 5-10 roles a day. I hadn’t done this since 2008. When there was interest, it was seldom for the actual role I applied for.

I think the biggest frustration was having several phone calls and email exchanges with recruiters, only to have complete radio silence when the hiring manager didn’t bite. The recruiters I value and will recommend are the ones who took the couple of minutes to mention it wasn’t a fit. Common courtesy, that is not that common.

4. The slowness of the hiring process

Hiring in the UK is full of risk. Unlike the US, it is not the easy to part ways with a low performing employee.

This risk seems to manifest itself in slowness and indecision. Even if I was the perfect candidate, they wanted to see more, just in case there was a more perfect candidate. Unsurprisingly often there isn’t, as the better candidates get “snapped” up quickly.

I had one consultancy company where I applied in December, had a first phone call saying they were interested on the 6 January. Then the ping pong started with various “coordinators” until my first interview was set for the 27 January. Needless to say, I never interviewed, as the company I have started with completed the process beginning to end within two weeks.

I had another experience where a bank hired someone at a more junior level than me (due to budget), when it clearly needed someone able to engage with senior stakeholders. The plan was that an existing manager would act as an intermediary. Since then, the manager has come to the obvious realisation that they don’t have time to do this, so now they are hiring a second person.

5. Be honest to find the right fit

It made sense to present the best version of myself, but I made sure to give my angle to it. What I am looking for, what I want to do. It is wasting everyone’s time to do otherwise. It might result in short term gains to do otherwise, but I could end up in role where I am not happy and under perform.

Companies sometimes don’t know exactly what they want until they see it. The previous person left, for whatever reason, perhaps it’s time to put a new spin on the role. It is easy to replace like for like, but that is not growth.

During my interview for the role I got, I was quick to point out how I would do things differently. Add more value. This piqued the interest of the (right) hiring manager.

6. Finding the right job is more than a role

The first step for me was finding the right recruiter. He put me forward for a role that was clearly not what I was looking for, it was going in a different direction, at least if I looked at the job spec. With over 20 years experience in the industry, the recruiter listened to me and immediately identified the right job for me, something that was more than a role. Experienced recruiters know this. They know the importance of chemistry, the right organisational fit.

The actual role perhaps counts 20% of my job. There are so many other factors. Location (the commute), typical hours, the manager, colleagues, stress (too much or too little), organisational culture. All this is too often ignored. 80% sacrificed for the 20%. I have managed to tailor the role so I will be doing mostly what I want to do, this came back to being honest in the interview. It set me apart.

7. Balance and focus is more important than ever

Since returning to Corporate a couple of weeks ago, I am still trying to set the right rhythm. I am struggling to run as regularly. I’ve already gotten the flu. I have had to deal with server issues at 11pm at night, because I  am now working on my projects in the evening.

But I continue to work within what has become my consistent framework – Prioritisation, focus and then relying on the compound effect.

After my transformation and completing 12 challenges in 12 months to break the old habits to make space for the new, I am now finding a better version of myself. I’m on track for a new 12 in 12 – 12 things from zero to live in 12 months.