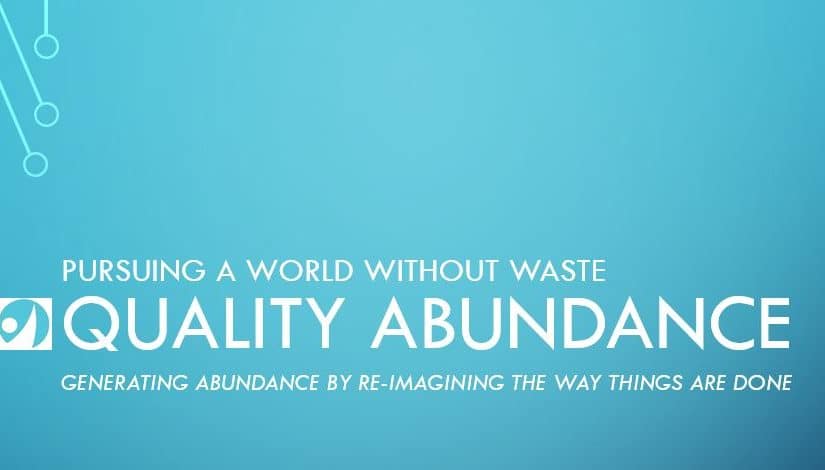 Imagine a world of greater abundance, one without waste.

By rethinking how we do things we can move from a world of systemic waste to one of abundance for all. A better world, more for all. I don’t need a degree in Environmental Sciences or Economics to know that the way we do things is simply unsustainable. We need a better way. We are on the cusp of this better way, with a collective effort we can make this a reality. A shift from our current trajectory is needed. Quality Abundance is part of that shift. It is about taking the first step and opening up the conversation.

Whether or not you believe all (the overwhelming) evidence of climate change or not, if you take a step back and think, what makes sense? Does pumping CO2 and other greenhouse gas into the air sound like it is likely to good or harm? Does throwing away the majority of what we have “used” in large landfills sound like a good idea?

The current economic system requires a growth rate of about 3% per year to be sustain our current levels of prosperity, more to improve the level of prosperity. Using the rule of 72, that is doubling our output and consumption every 24 years, quadrupling output in less than half a century. Some of this increase can be absorbed by a shift to a more serviced based economy, but not enough. We need a better way of utilising what we have.

The Local – A separate, but related problem

On my way to our Office in Shepherds Bush, I stop by one of the various Costbucks manifestations. The coffee is fine in the office, but not good enough to start my day with. At home and at our Croydon office I use Pact Coffee and a V60 filter, a luxury, but cheaper than buying from a barista. Once I have finished drinking my coffee, I throw away the coffee cup, it troubles me, the conceptually similar “Do no litter” and “Recyclable” emblems mean a lot of people assume they are recyclable, often the lid or cardboard casing is, further enshrining the inconvenient truth. It disgusts me, but not enough not to buy it. I’d gladly pay an extra 10p for something recyclable or even better, reusable. In my laziness, I’m not prepared to bring my own mug, mainly because my routine is not consistent, a weak excuse, but my apathy is strong. We live in an age of convenience, while this generation may not be able to afford housing, it can afford and expects convenience. Something previously considered a luxury.

The Solution –  At least a hint towards one

A few months ago Mike came to me with the enthusiasm of a kid entering a theme park. He introduced me to the concept of the Blue Economy, I was interested, but not excited. I like to absorb and reflect on new information. Only later did I get excited.

The easiest illustration of the Blue Economy is by demonstrating on how wasteful the coffee cycle is (even me with my reusable V60 filter).

The more I explored the world of the Blue Economy, the more excited I became about the potential, I was started discussing it with Neil and then we all met up to map out it’s potential. Inspired by the works of Muhammad Yunus and Gunter Pauli, combined with my personal challenge to go beyond “dabbling“.  We are now working to begin spreading the message of circular (systemic) business models, such as the Blue Economy. We want scientists to be valued for the rock-stars they are. Even in its early stages, we can explain it in three sentences, it is a focus on projects or initiatives that:

As we have explored further we have realised that there are already a plethora of initiatives out there, the problem with them, is that I had never heard of them. I noticed that the discussion is locked into a few specific corporates, state authorities, academia and foundations. Basically they are already preaching to the converted. We want to widen this scope for people who want learn about opportunities to be better, less wasteful and how they can support these circular initiatives. To spur discussion we have created a Facebook group for those interested to learn, engage and share, which you can join here.

Where, it will go long term is undecided, perhaps Quality Abundance will be an investment fund, an incubator, create consumer focused products, be an educational channel. That is for the future. For now, we challenged ourselves to what we can start today, how to take the first step in a long and exciting journey. We created the concept of Quality Abundance.

Update: Quality Abundance will initially take the form of an Ethical Impact Investment Hub for people who want good returns while doing good.

If you want to be part of this movement, I encourage you to join our Facebook Group here.