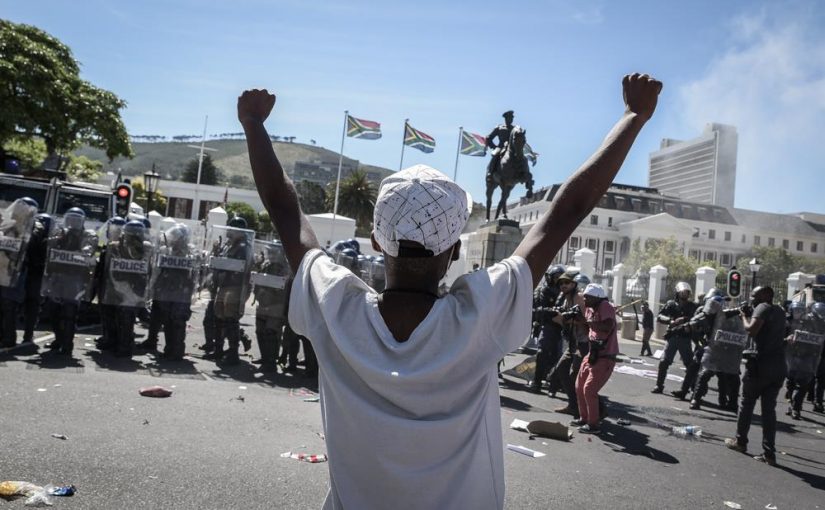 It’s been over a year since the #FeesMustFall protests  began in South Africa, and we are no closer to finding a solution. It’s time to think about how we can reduce the costs involved in running a University, instead of asking who will pay expensive fees. A potential solution is Cloud Based Learning.

Recently a friend, Charlie, asked me to help him with his Statistics assignment. I went over to his house, expecting to find him struggling with a traditional text book and scrawled notes taken earlier in a lecture hall. Instead, he had his laptop open. On his screen, a tab called “Resources” in blue.

Charlie’s home was where he went to listen to lectures. Actually “listen to” isn’t quite right, “engage in” is more accurate. They were video recordings made once by the lecturer. This same video was simply used each time the course was run. The PowerPoint slides used by the lecturer were sitting under the Resources tab too – along with detailed notes, past assignments with solutions, past exam papers with solutions, a study guide and other informative links.

There is no doubt that fees must fall. However, costs are rising. The devaluing of the rand, coupled with the pressure on Universities to cope with growing numbers means that an entirely new workable solution is in order. There are more students attending university from the richest 10% of families, than the poorest 80%. The inequality has got to stop.

Dave recently wrote a blog piece that said two of the biggest expenses of a University were its facilities, and also its limited scalability.

The Cloud Based Learning available at some overseas universities almost eliminates both of these costs. The lecturer would need an office and a video camera – though they could potentially do this from their home. A venue would be rented occasionally for open sessions with tutors and the lecturer. A venue would also be rented for the end of semester exam. This means facilities would be kept to a minimum, and the course can easily be scaled up to accommodate many more students.

This technology is already available in South Africa.Though is still relatively new and underutilised

One argument against this style of learning is that the student might feel like an “island”, with little interaction with the lecturer and their fellow classmates. This isn’t the case. Charlie could email or call his lecturer if he had questions. He could also go to group sessions if he wanted to, where tutors were available to help students with their questions. This way, more face to face interaction was available to him.

There was also a “Discussion” section on the course website, where students could discuss any difficulties or breakthroughs with each other on an online forum.

This post is intended to be the start of a conversation, the beginning of what may be the solution. There are obviously large issues that still need to be worked through with Cloud Based Learning in South Africa.

Firstly, how do we get the internet out to the students? Connecting everyone to LAN might be too expensive, but what about using the cellphone provider networks? The cost of an education could be whittled down to slightly more than the cost of an iPad with mobile connectivity.

Thirdly, it’s clear that this kind of learning would only be possible with certain subjects – mostly commerce, mathematics and computer science related. More “hands on” subjects such as veterinary science would only be able to use Cloud Based Learning very minimally.

Lastly, focusing on reducing University fees might be losing sight of a bigger picture. We should really be addressing inequality in education at grassroots level – Primary school. Then High School. Research shows that unequal access to university is rooted in a highly unequal schooling system where access to high quality schooling largely depends on a family’s ability to pay school fees.

A potential solution to addressing this inequality in the short term may be dedicated TV and radio channels for Primary School students. I know one of the reasons I gained distinctions in High School was watching William Smith and his colleagues on SABC3. Perhaps a post for another day.