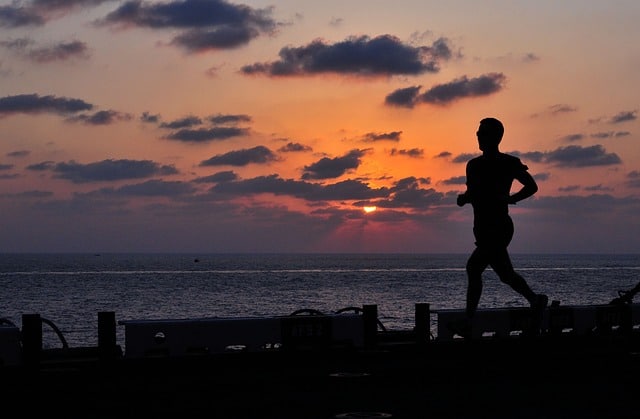 I was 21kgs overweight, obese by medical standards, asthmatic as child, I have scoliosis with a double spine reversal, I was suffering from chronic shin-splints and I am a corporate desk jockey, I was confident that I was not a runner. I just wasn’t born for it. I never imagined that one day I would be doing 21km training runs. It hasn’t been a quick or easy journey, but it has, and continues to be, truly trans-formative.

I wasn’t born for it, I’m not a runner

As a 9 year old, I came third in the U10 cross country. I had been playing sport 2-3 hours per day, something I continued to do throughout my schooling. After completing the cross country, a teacher made an off-hand comment that my arms were swinging too wildly and I was wasting a lot of energy when running (a 9 year old needs to conserve energy?). I immediately replaced the swinging arms with a more rigid arm position.

As a 10 year old, I came twelfth in the u10 cross country. One year or 10% of my life had passed and I did not make the connection to what went wrong. In fact, it took me almost 25 years.

Throughout school I was not a runner. I would lead the chasing pack of runners who didn’t care, because I cared about giving my best, but I was never competitive. I would play sport for 2hrs in a row, at a high intensity with no issues, but if I went on a “training” run I found myself walking after about a kilometre or so, not a conscious decision, it just kind of happened. I’d lose interest.

Too fat, not built for it, definitely not a runner

As I entered the working world in 2008, I found that physically I couldn’t do exercise more than once a week, this was due to chronic shin splints. After a hockey match, I used to go home and ice my shins to alleviate the pain, when I had the courage to go to a hockey practice mid-week, it meant a night of tossing and turning due to pulsating pain and discomfort.

By 2014, I was 21kgs (46lbs) overweight, obese. I had my diagnosis of scoliosis in the spine confirmed, it is in the form of a double reversal, meaning that dependent on perspective, my ‘S’ shape was backward. Exacerbated by bad posture habits, including sitting working at a laptop each day.

Running for fat loss, not to become a runner

In 2014 my transformation began. The first lever was diet. The second lever was exercise. The first lever “only” required will-power. The problem with the second is that by this stage, I couldn’t run to the end of the road, there were no quick fixes or hacks available. This had to be done the hard way.

I started a “Couch to 5km” programme. I didn’t worry about speed, just that I didn’t stop and walk, I would run slowly, very slowly. I was inspired by my mate, who I knew had a strong preference for shorter distances, I asked him how he was able to run 5km, he said to me “I just refuse to give up, one step, then another.”

It was hard work, I was carrying so much weight. I had only chosen to start running as it was more convenient to fit in and around my constantly shifting work schedule. Running was more flexible than classes and cheaper than a gym membership.

Learning to run, could I be a runner?

I started running home from work as part of my commute, 2-3 times a week. By taking my running gear to work, I was committing to running when my will-power was high and effort required was low. At this stage, if I had waited until I got home and then went for a run, I am pretty sure I would have stopped my training programme.

My commute was a distance of 7km; when I started, I would run between bus stops and walk to the next one. Slowly I started running the whole distance, then I got faster, I was getting into it. Then I plateaued, I was at Galton’s wall. I was getting marginally better, but not really.

Effective cadence is produced by swinging the arms to provide the counter-balance to stride, crucial to allow good form and a quicker cadence. In fact, I found it easiest to set cadence by swinging the arms, with the swinging arms counter to the legs at the same rhythm, providing the balance needed.

It took 25 years, but I got there, swinging arms are good when running…rigid arms are bad.

Longer strides and quicker cadence, simple in theory, but not always easy to employ. I had to add variety to my running schedule, not just simply try and run the same route faster. I started doing 4 types of runs each week. The first was 4 x 500m around the block. I would wait to recover between laps and try and attack them at 80%-90% intensity. The second was a Fartlek, where I would alternate running quickly and slowly between self identified markers such as a car or sign-post. The third was a long run, at this stage a long run for me was just over 5km. This was my time trial, to measure any improvements. The fourth run was a recovery run done at a leisurely pace, if my schedule only allowed 3 runs, this is the one I’d drop.

I got over Galton’s Wall and then some. Improving by over 1 min/km in a couple of months, to put that in perspective it had taken me three months to improve 30 sec/km running the same route.

I found that I only had to fight the urge to skip a run, perhaps 1 in 3 times, but most times I went anyway, telling myself it counted double; and it did, the next run I generally enjoyed more and demonstrated progress.

Getting better is not always better, learning to be a runner

After a while, I was increasing the distances. I had notions of running a marathon. One week I did 3 x ~10km, comfortably. I was still doing a variety of runs, I would do one run at an alternating pace, one time trial and one at a more leisurely pace. But, I felt like I was in the red zone and likely to get injured.

I had read Born to Run years before, I had even bought the shoes. I decided to give it a go, and experimented with minimalist shoes. I sought the advice of a mate that had gone from “dabbling” in marathons to running “The Wall” and other Ultra endurance running, after transitioning to minimalist shoes. He suggested that I go for a 90 minute assessment lesson. Probably the best £100 I have ever spent, certainly with regards to running.

During this session, I realised how bad my “technique” was, my left leg had been a passenger, when I stood, my weight distribution was horribly uneven due to an ankle injury almost a decade earlier. There was more to remedy, but you get the idea. I was in pretty bad shape. I had got better at running, despite myself and was in danger of long-term damage outweighing the benefits.

Getting better, basics of becoming a runner

I am now convinced that a lot of the benefit from barefoot running is simply that the proponents focus so intently on technique. There is no perfect technique, but there are changes you can make to work towards your own personal “perfect” technique. Reducing the risk of injury, while improving performance.

My transition required that I didn’t go on any runs in December last year, I had to focus on exercises designed to build up my base, in terms of flexibility, strength of stability muscles and re-train the various muscles to work like they should.

I also realised something had happened along the way in the past couple of years, running had gone from being a chore, a means to an end, to becoming a sanctuary, a form of mindfulness. A place to decompress. When I stopped for December, I started to struggle to sleep (again), I didn’t make the running connection until January, when I started running again and sleep returned.

Born to run, becoming a runner

After completing the base exercises, I slowly built up distance again, using an excruciatingly slow (at times) programme, but I wanted to it right, I was disciplined and focused.

I was disciplined and focused, until February, I got arrogant. I broke the golden rule of never increasing distance by more than 10% per week and I did not listen to my body. I went from 10km to 15km, I didn’t just break the rule, I smashed it with a 50% increase. It was fine though, it went well. It went well, until the next week, when I got injured. Fortunately on this occasion, I got off lightly with a hamstring tweak, but it was frustrating. Two weeks of lunges and stretches later, I was back on the road. Lesson learnt.

The lesson being that mentally, I had become stronger, physically I had work to do. I learnt that mentally I needed to break through resistance, physically I needed to gently push against the resistance. Each time I pushed a little too hard, I’d pick up a niggle. Not usually in the act, usually later, in the next run for example. I also learnt that being a runner was  partly a process of managing one niggle to the next. The foam roller and lacrosse ball became integral to my bed time routine. I use them nightly and they are largely to thank for being able to manage my chronic shin splints, of course not carrying around as much weight probably helps too.

And now, I am a runner

I had to be prepared to get worse, before I could get better. I had to correct underlying fundamental faults that were going to restrict my progress and probably do long term damage. I am still playing with cadence, stride and other aspects of technique, re-training my body, experimenting. I still have a lot of work to do, my next focus is to work on improving the mobility in my ankles, as that is where I feel my next gains will come from. I am focused and determined to do the right things consistently. I know if I do that, the results will take care of themselves.

Over time, I have dropped 21kgs and now that I can comfortably run 21km – a half marathon. My medium term goal is to run a sub 4hr marathon, ideally, but there are so many factors out of my control that I want to be realistic. Push myself, but not to the breaking point. Once that is done, then, who knows? – Ultra? Trail running? Something new?

So if an obese corporate desk jockey with scoliosis and shin splints can become a runner, what is holding you back from achieving what you want?

Set realistic, but tough goals. Prioritise, focus and consistently do the right things (habits), then with the compound effect, transformation will occur.