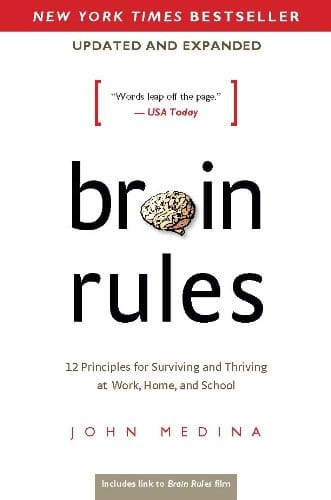 As part of my reading for my Personal MBA, I am documenting the key lessons I learnt from Brain Rules. It is not intended to be a summary or review, rather a reflection of how the book has influenced my thinking.

I am conflicted as to whether Brain Rules is sufficiently relevant to have gone on my Personal MBA prospectus. It is an interesting read. Very interesting. It provides 12 rules to consider when looking to optimise any environment. Some provide the why behind colloquial wisdom, others provide clear contradictions. We ignore these rules only to our own detriment. If nothing more, they are worth knowing.

“If you wanted to create a business environment that was directly opposed to what the brain was good at doing, you probably would design something like a cubicle.”

We know very little about the brain. Or rather, we know quite a lot, but there is so much to know, that we know relatively very little. There are 12 rules.

There are two ways to beat the cruelty of a harsh environment. You can become stronger or you can become smarter. We did the latter.

For the first few million years, despite rose tinted reflections, our record as a species is not very impressive. We mostly just grabbed rocks and smashed them into things. Scientists and historians in an attempt to salvage some of our dignity, called these sharp stones we used – “hand axes.”

Still, we climbed from close to the bottom of the food chain to the top. We had insufficient physical advantages, so we adapted to variation.

We developed symbolic reasoning, as a uniquely human talent. Allowing us to coordinate as a group.

We started with a “lizard brain” to keep us breathing, then added a brain like a cat’s, and then topped those with the thin layer known as the cortex—the third, and powerful, “human” brain.

We evolved moving. As nomads. Our brains evolved moving and our current relatively sedentary lifestyle accelerates the ageing process (not necessarily dying). It is not surprising that I use running as an opportunity to crystalise my thinking on any problem I am grappling with.

The nature of the exercise is not as important as it being regular. 30 minutes 2-3 times a week, with a bit of strengthening seems to be the minimum effective dose (best bang for your buck). I’d push for 40 minutes, as this has been demonstrated as the minimum effective dose for fat burning. It is no surprise the image of London and New York is one of being mentally vibrant. Few in the city do less than 40 minutes of walking a day.

Exercise helps blood get to where it is needed. It has shown to reduce the risk of Alzheimer’s by more than 60%, to name but one benefit.

When we are asleep, the brain is not resting at all. Other than non-REM (20% of the time), our brains are actually more active when we sleep.

We may have different natural sleep patterns to work at our optimum and these are broadly categorised as larks, owls and hummingbirds. Early, late and in-between. How much sleep we require varies, but chances are having too little.

One warning is to respect the afternoon dip. Nap if possible, otherwise avoid meetings at minimum. Once I leave corporate again, I plan to schedule in nap time.

There is an interesting concept called “Learned Helplessness”. This is the perception of inescapability from a situation and is perhaps why relating to a role model is so important. Seeing someone who has done it allows us to escape this perception.

We are built for stress….but only that which lasts a few seconds. We recall stress more easily than other feelings, this recall bias causes us to believe we have more stress than perhaps we really do.

We need some stress, it’s about balance. Where that balance is, varies from person to person and probably by stress factor. What is key is a stable home life, we don’t have two brains. Which is why I don’t like the work-life balance concept, I just prefer life balance.

We are all wired differently. Learning rewires our brains, some is a maintenance dose, then we can progress. What we do rewires it.

We are wired differently and consequently think differently. This is why schooling milestones just don’t make sense considering our variability. They are a bit like have a set of clothing and only those that fit into it are allowed to progress and our brains are more variable than our physical appearance.

The more attention we give, the more that is retained. 10 minutes is about our attention span.

We remember the emotional attachment to the memory more than the details. We are better at extracting meaning and patterns than memorising details. We cannot pay attention to more than one thing. We multi switch, not task.

The more elaborate we encode, the stronger the memory. We develop pathways, which we can reuse, over time it becomes easier.

We have short term or working memory, it needs to be repeated or will disappear. Long term reliability in memory comes from repetition and gradually adding new information.

Adding senses, is like taking a picture from a different angle, when we re-construct the memory, the more senses stimulated, the more complete view we have.

We learn best with multiple senses, they need to be complementary not distracting. Smell is known to very powerful in memory recall.

Vision takes up half our processing power That’s why we need blind tastings.

Our vision doesn’t work like a camera replicating what is there, our brain interprets it.

We pay attention to size and motion, which makes sense, a tiger coming in for the attack would certainly be noticeable.

Music training will make you smarter and better in a social setting.

This is to sensitive area to helpfully explain here in a few sentences.

Brain Rule 12 – Exploration – We are powerful and natural explorers

We have mirror neurons, which mean we are influenced by our environment. We see something happen and experience it almost as it were happening to us.

The brain is wired to keep learning for our entire lives. I like to see it initially as a maintenance dose, then beyond that as actual improvement.

Our survival did not depend on coordinated and clear sets of information, rather chaotic and often unrelated bits of information, so we extract what we believe to be relevant. We are active problem solvers. We don’t learn well passively. Observation, hypothesis, experiment and conclusion are most powerful in the learning process.